We have a room-sized Persian Hamadan rug 8’ 8” x 12’ 0” in the showroom.  The design and color are unusual for a Hamadan.  The field is a deep sky blue with an all-over repeating pattern in vibrant aqua, golden brown, and orange-red.  The motifs are bold and stylized, residing somewhere between tribal geometrics and classic florals.

While lacking the uniformity of a city rug, which is woven from the pre-planned design "blueprint" referred to as a cartoon, improvisation created the unique character and unusual beauty of this rug.  With its bold colors and open pattern, the rug is one of a type called "decorative" by interior designers.  Job locally purchased the rug, believed to have been woven in the 1930's.

Due to age and wear, this Persian Hamadan has sustained some damage over the years, and that damage was repaired.  One particular repair was not very good – the color was dusky and poorly executed weaving gave the area a shrunken appearance.  Our weaver removed this previously repaired area and made a small loom upon which to reweave the missing section.  He used the intact border as a pattern to duplicate the proper design and color placement in the new weaving. 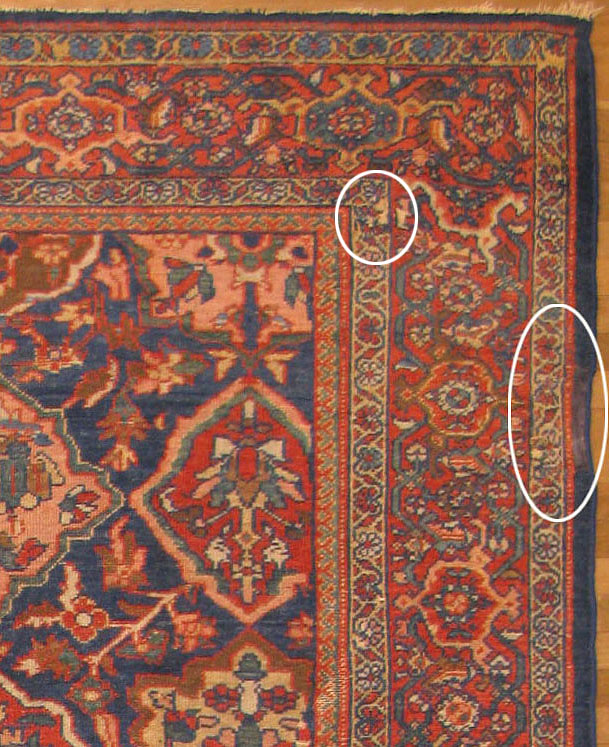 The bad repair can be seen along the right side of the rug.  This repair's color does not match the surrounding area, and the edge is curved, not straight.  Below is a close up of the section that the weaver removed from the rug.  A second area requiring repair is also circled. 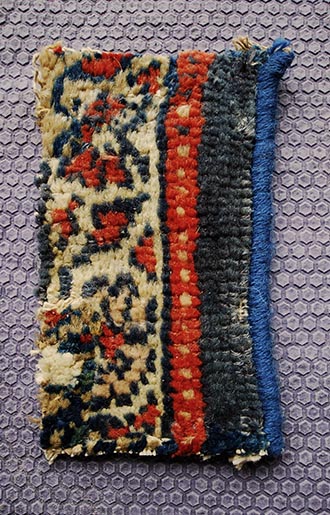 Several steps in the process of weaving a new repair: 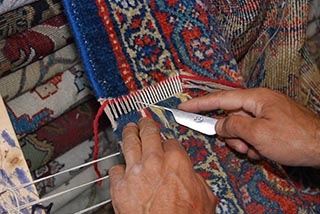 The weaver uses a tool, which combines a small hook with a blade, to pull two warp threads forward on the loom.  He will tie his knot of wool to these threads. 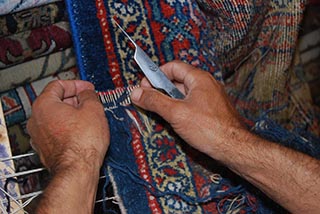 The weaver pulls a strand of matching blue wool behind the warp threads.  He will then use the hook end of his tool to assist with tying the knot. 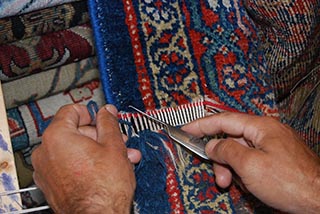 The small hook is used to help tie the knot.  This process happens so quickly it is difficult to photograph.  Using the tool requires dexterity; it allows small knots to be tied by relatively large hands. 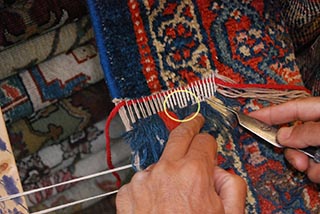 You can see in this photo where the weaver has tied some blue knots and some orange-red colored knots.  He has left an area open between two blue knots in this row, so he can change colors again. 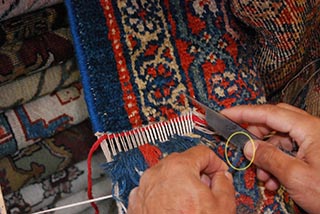 In this photo, the weaver uses the blade to cut the blue wool strand after completing a knot. 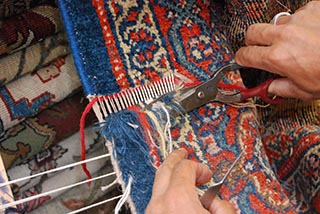 After an area of weaving is completed, the hanging yarn is trimmed with scissors. 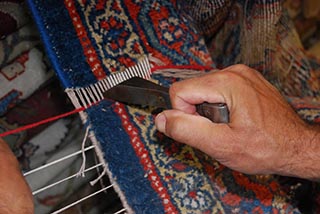 Once a row of knots has been tied, a horizontal weft thread is pulled between the vertical warp threads.  The weaver pushes down the weft thread and the row of knots with a special metal comb. 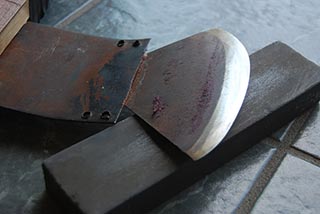 Once the entire repair is completed, this special blade is used to shear the surface of that area, so it will be level with the surrounding rug.  An electric clipper is also sometimes used for this purpose.

After the weaver has properly repaired the missing section of the rug's border, he shears away the ends of the roughly cut yarn, resulting in a smooth, level surface.  The edge of the newly woven section is overcasted (sewn over and around) with blue wool to give it a finish that matches the rest of the rug.

Below is the finished woven repair.  This area is now practically a perfect match to the rest of the border, unlike the original repair, which was too small and too light in color. 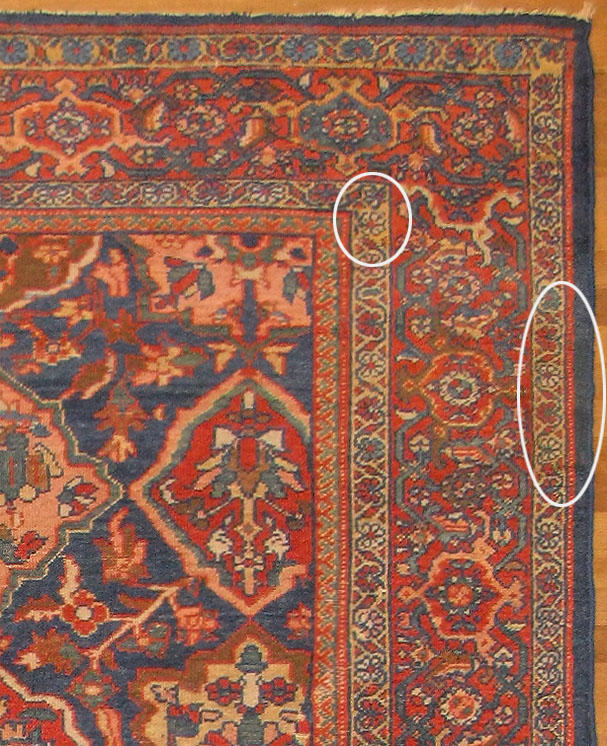 The completed repairs are circled.  One can see how both areas are now virtually seamless with the original rug.