The form of the structure evokes the appearance of a weaving loom.  The design of the exterior walls is said to shade the windows, lowering the museum's interior temperature for the benefit of visitors and the antique rugs on display.

Unfortunately, the museum does not seem to have its own website where information about its history, the format of its exhibits, and the extent of its collections may be validated.  The information that follows was gathered from various sources, including travel websites. 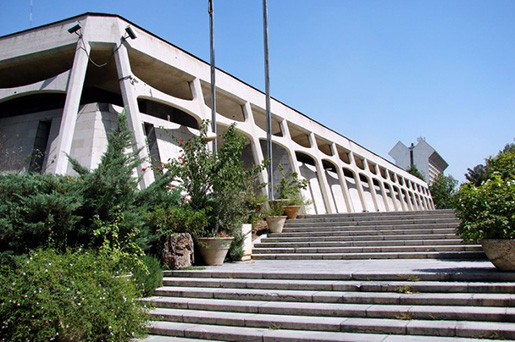 The museum has two exhibit halls (one on the first floor and one on the second floor), a library housing roughly 7,000 books, a rug repair shop, and a café.  Classes in weaving, rug design, and rug restoration are taught at the museum.  Based on descriptions provided on-line by visitors, the first floor’s galleries have traditonal floral and pictorial rugs, permanently on display, while the second floor’s galleries show temporary exhibits of tribal rugs and kilims.
Once the museum was established, experts in the field set out to develop the collection of valuable and significant carpets by traveling to rug weaving centers all over the country.  After the Iranian Revolution of 1979, the importance of this process and the rugs collected by the museum’s team increased significantly as the museum became a repository of Iran’s cultural heritage.  By varying reports reviewed on-line, there are 135-200 rugs on display in the museum at any given time.  It’s highly likely the museum is in possession of far more rugs as it is not uncommon for collections to be rotated in and out of storage for preservation purposes. 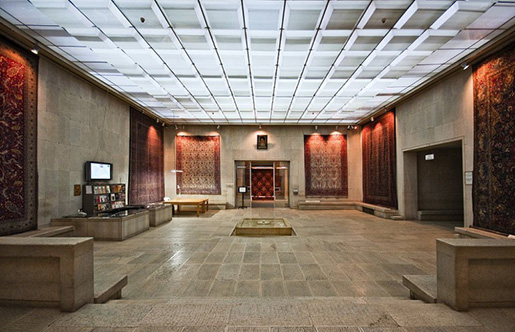 The rug displays are arranged in chronological order, beginning with a replica of the Pazyryk rug, which is the oldest rug in existence.  The actual, ancient Pazyryk rug resides at the Hermitage Museum (St. Petersburg).  The Pazyryk rug came from the Eastern Altai region in Russia where it was buried in the Pazyryk Burial Mound.  This rug, handmade of wool sometime in the 5th or 4th century BC, measures approximately 6'1" by 6'8".  The Pazyryk rug was very likely woven in Tabriz, which is in northwestern Iran.

Some sources say rugs in the Carpet Museum of Iran date back to the 16th century and others say the 17th century, however, both centuries would encompass rugs of the Safavid Period (1501–1732), which is an era during which rug weaving in Iran became one of the highest forms of Persian art.

This video of the museum shows several examples of rugs from the Safavid Period in addition to providing a glimpse of the exhibits.  Rugs displayed in the museum originate from significant weaving centers in Kashan, Kerman, Isfahan, Tabriz, and Khorasan Province.

* According to Wikipedia, “[Abdol-Aziz Mirza Farmanfarmaian] partnered with the American firm of Victor Gruen Associates, [proposing] his most important project, the Master plan of Tehran.  This comprehensive plan, which was approved in 1968, identified the city problems to be high density, expansion of new suburbs, air and water pollution, inefficient infrastructure, unemployment, and rural-urban migration.  To deal with these problems, the consortium envisioned a 25-year planning horizon which encouraged reducing the density and congestion of the city center through polycentric developments around Tehran.  Eventually, the whole plan was 'marginalized' by the 1979 Iranian Revolution and the subsequent Iran–Iraq War.”