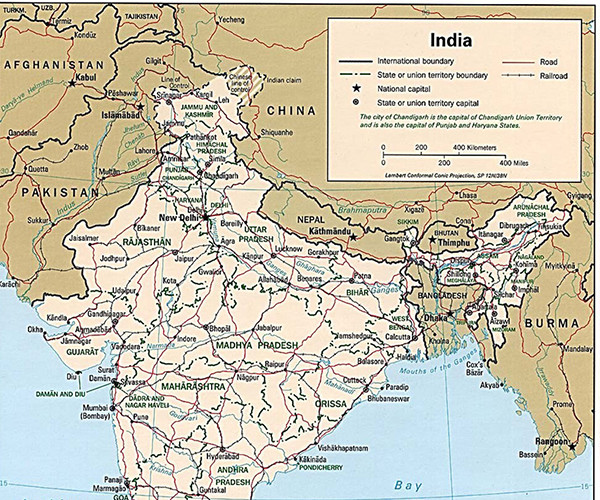 Agra: A city on the banks of the Yamuna River in the northern state of Uttar Pradesh, India. Most famous in Western culture for being the location of the Taj Mahal. Agra was the seat of the Mughal Empire from 1526 to 1658, when it became a major center of carpet production. The Persians first introduced Indian weavers to rug-making, hence designs in these rugs will show the influence of classical Persian floral patterns. Motifs include the boteh (pear), pineapples, and modified cone shapes. Prison weaving took place in Agra and rugs woven in this setting were green or blue with cream while newer rugs include purple and brown shades. Shops selling rugs and carpets in Agra are mainly found near the commerce district surrounding the Taj Mahal. Many weavers who sell handwoven rugs today are direct descendants of the weavers who used to weave for the Mughal emperors. These rugs tend to be thick, of good wool, primarily using natural dyes, and antique and semi-antique rugs from 1900-1930 may be difficult to find. Sizes are 9' x 12' and larger. Today rug-making in Agra is a strong and thriving industry.

Dhurrie: A cotton or wool flat weave rug from India. Colors range from vibrant to pastel and patterns are geometric or floral. The design of the rug is created with the weft thread. A very practical rug that is suitable for a casual setting, like an eat-in kitchen or enclosed porch. Dense cotton Dhurries are very durable and are still seen in some of the palaces of India today. Dhurries are a good value for the money when it comes to handmade rugs.

India: Located in South Asia, the seventh-largest country by geographical area, the second-most populous country, and the most populous democracy in the world. Commercial rug making in India is about a 400 year old industry. Handmade rugs woven in India became popular in the 1990's, due to the demand for high quality, value priced rugs in the American market. The Iranian trade embargo, which did not come to an end until 2000 resulted in Iranian rug merchants in the United States, who could not import rugs from their own county, requiring a source for Persian designed rugs, and India and China provided the merchandise they needed. Handknotted, Indian wool rugs have an especially thick wool pile and may be just as high in quality as rugs made in other countries.

Mughal (Moghal): Mughal rugs would be any of the handwoven floor coverings made in India in the 16th and 17th centuries for the Mughal emperors and their courts. During the Mughal period, carpets made in India became so famous that demand for them spread abroad. Rugs woven for the Mughal emperors, including Jahangir and Shah Jahan, who was responsible for building the Taj Mahal, were considered to be the finest. As the rugs were made for palace use, sizes could be very large and the quality would be exceptional. Aside from Persian influenced designs, Indian designs such as landscapes, frolicking animals, architectural lattices, and trailing flowers and fruit, such as grapes, were depicted in these rugs.

Varanasi: Also commonly known as Benares, Varanasi, is a city situated on the left bank of the River Ganges in Uttar Pradesh, India. Varanasi is considered one of the oldest continually inhabited cities in the world and is a major rug weaving center in India. It is possible that up to 50% of the rugs made in India originate from this area. Persian influenced hand-knotted rugs are made in Varanasi and the surrounding towns along with French-style Savonerrie rugs and flatweave Dhurries.