Western Europe & All Other Regions 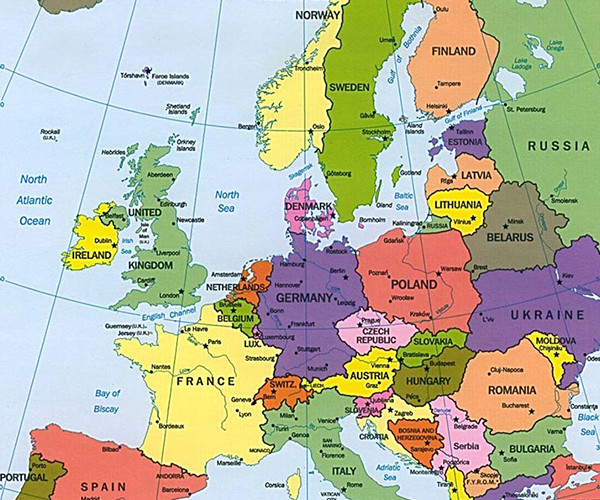 Aubusson: Aubusson is a town south of Paris, France. Aubusson rugs, emulating the look of Savonnerie rugs in a flat, tapestry weave, were made available to European nobility. (During the reign of Louis XIV, Savonnerie rugs were being woven only for royal commissions.) The Aubusson's flatweave is influenced by the Persian kilim, which has been in existence since at least 500 B.C. Slits between color areas in an Aubusson tend to be smaller than those in a kilim, giving it a more refined appearance. Like Savonnerie rugs, the designs tend to be ornate and often feature pastel florals and architectural borders in brown and gold hung with garlands. Today this style of rug is being made in China for the mass market, while the Aubusson rug-making tradition continues in France on a much smaller scale. The quality of a Sino Aubusson may be just as good as a French Aubusson for just a fraction of the price. Due to the rising cost of labor in China, these rugs are not being made in the same numbers as they were in the late 1990's and early 2000's. Some of the classic design motifs are recreated today with the permission of the major museums in France.

Mamluk: The Mamluk Dynasty of Egypt lasted from 1250 to 1517. Mamluk rugs have consistent patterns and construction that are unique to this place and time in history. The composition of a common design starts with a square or circle at the center of the rug, which is filled with a geometric motif such as stylized leaf forms in clusters with vines. Similar or complementary motifs surround the central square or circle radiating out towards the edges of the rug, creating the overall impression of a starburst. Colors most often seen are red, blue, and green with some yellow and neutral tones being used as well. Antique Mamluk rugs are very high quality and a bit of a mystery, since there are no known influences from other rug weaving traditions on these rugs; weaving is usually passed from one group to another through contact between weavers. Today Egypt produces some fine rugs, but they tend to be priced higher than rugs from other parts of the world, and in some cases they may even be overpriced. India reproduces rugs with Mamluk designs in a limited quantity, because the high level of detail in these rugs and their somewhat limited appeal to the export market makes them less desirable to make.

Savonnerie: Commercial carpet production facility south of Paris, France that resided in an old soap factory, hence the origin of its name from the French for "soap," which experienced its highest accolades in the latter half of the 17th century. Due to its prestige as a producer of carpets for diplomats and royalty, the Savonnerie name began to apply to a similar style of knotted rug from other makers. Early Savonnerie rugs were influenced by Persian designs, but they soon found their own style influenced by European tastes. The classic Savonnerie design features a floral medallion and architectural borders. New Savonnerie carpets that are styled after the Roccoco influence of the 18th century feature softer colors and their designs include sprays of flowers and curling leaves in gold on backgrounds of rose, blue, aqua, and cream with gold and brown borders. As French Savonnerie rugs became more expensive, Spain began to make them as well in the late 1800's through to the 1930's. Spanish Savonnerie-style rugs made on burlap foundations have fallen into disrepair over time. France also continued to make them at a very high cost that could only be afforded by the very wealthy. Savonnerie rugs have been reproduced in China since the early 1990's. Some of these rugs are of exceptional quality and replicate the French look reminicent of the Louis the XIV era.

Tapestry: Woven textile art, specifically for wall-hanging, where all the warp (vertical) threads are hidden and only the colorful weft (horizontal) threads are visible and form the design. There are old French and Flemish tapestries and new tapestries made in China. Perspective, proportion, and detail are important in the rendering of images. Preserved samples found in the desert provide evidence of tapestry weaving in Greece circa the 3rd century BC. In Europe, tapestry began its ascent as an art form in the early 14th century with the first tapestries being produced in Germany. The popularity of decorative tapestries may be attributed to their portability. Kings and noblemen would transport rolled tapestries from one residence to another and different tapestries could be displayed on different occasions. To some degree, these wall-hangings even provided a measure of insulation from the cold. In the 14th and 15th centuries; Arras, France was a thriving textile town where fine wool tapestries were made for the decoration of palaces and castles. Few of these old tapestries survived the French Revolution, when hundreds were burned for the gold thread used in their construction. By the 16th century, Flanders was the center of tapestry weaving in Europe, and in the 17th century Flemish tapestries were arguably the most artistically and historically important being made. Tapestries from this time generally depicted scenes from biblical and mythical tales. There were also Flemish Verdure or "greenery" tapestries, which were widely copied in France. Verdure tapestries depict thick vegetation, sometimes with a distant castle or animals and their hunter in the background. In the 18th and 19th century, tapestries provided a window to the outdoors where people and animals were engaged in activities like reading, dancing, and singing. Tapestry designs have even been styled after famous paintings. In the 19th century, William Morris, the English architect and designer, resurrected the art of tapestry-making in the medieval style at Merton Abbey (England). Today Chinese tapestries are well-made and a good value for the money. Tapestries are typically woven in wool or in wool and silk on a cotton foundation.