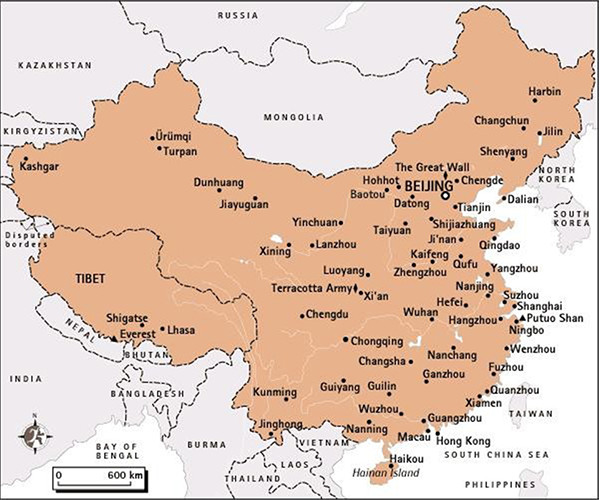 Art Deco Chinese: Art Deco was an international design movement of the 1920's and 1930's expressed through the decorative arts and architecture. There was no specific Art Deco movement in China, however, the disruption of carpet trading routes through Iran and Turkey following World War I left an opportunity for rugs imported from China to become popular during this time. American entrepreneur Walter Nichols provided the impetus for much of the weaving during this period, producing rugs for the American market in Tiensin, China. While Art Deco style is often defined by the influence of math and geometry resulting in highly stylized, architectural design elements, Chinese rugs of the Art Deco period are brightly colored with bold hues of blue, green, gold, and purple with open fields and patterns influenced by the natural world - flowers, plants, butterflies, and beetles. "In Search of Walter Nichols" by Elizabeth Bogen provides information specifically on the weaving of "Nichols Rugs."

China: New Chinese rugs became popular in the American market starting in the 1920's and 1930's with the Art Deco Movement. In the 1950's and 1960's state run weaving factories dominated the Chinese rug market and the style known as "Chinese Carved" came into prominence, featuring softer colors and classical motifs. Chinese Carved rugs often have thin architectural borders that feature fruit blossoms, glyphs, and curliques. Chinese rugs were not exported to the U.S. market prior to 1972, as they lacked "most favored nation" status. Contemporary handknotted rugs made in China based on traditional Persian designs have 160 or 200 lines (or rows) of knots per linear foot and can usually be identified by an overall appearance that is very precise. Unlike the Art Deco rugs and Carved rugs, which have a thick and relatively long pile, the pile of Chinese or Sino Persians is typically low, and their designs are finely rendered. Often some silk is used around design elements like flowers and leaves to give luminescence to their outlines. High quality, delicate Chinese silk rugs may be 230 or 300 lines and among some of the finest rugs ever made. China made Persian designed rugs from the 1980's through 2004, but due to the rising cost of labor, the Chinese priced themselves out of the market, which resulted in significantly reduced rug production. Western China still produces some rugs due to their labor cost being on par with a country like India. Due to the economic slowdown of late 2008 and early 2009, producing rugs in China has become more profitable and this may provide an enticement for the Chinese to increase rug weaving in their country.

Chinese Carved (90 Line, 5/8" Thick): Chinese Carved rugs came to popularity in the 1960's after the communist revolution. Rugs with traditional Chinese motifs represented the nationalism of the time. Rugs are woven and sheared and then the designs knotted into the rug are accented by the addition of carving their outline, which gives the face of the rug texture and depth. Terms such as 80 Line (5/8"), 90 Line (5/8"), and 120 line (3/8") refer to the number of knotted rows per linear foot of rug across its width and the length of the rug's pile. Rugs termed "closed back" are made in China, and the Chinese Carved rug is an example of one of these. Warp threads in a closed back rug lie on two levels. The full loop of the Persian knot that is used to tie these rugs is wrapped around the lower warp thread. As a result, when looking at the back of the rug, all you see are rows of tied wool knots, with no visible warp or weft threads. A closed back rug has a slight stiffness to it and a firm body. These rugs are made in small, scatter sizes and large room sizes.

Tibet (& Nepal): Modern Tibetan rug-making started after the invasion of Tibet by Chinese Communist forces in 1950. Prior to that time, rugs made in Tibet were used by the people making them for floorcoverings, seat cushions, wall-hangings, and horse saddles. Rugs were woven for monasteries where monks used them to cover their prayer benches during religious ceremonies. During the 1950's, many Tibetans, including the wealthy, aristocrats who sponsored weaving activities, fled to India and Nepal, and the monasteries shut down. After 1959, when the insurrection against the Chinese Communists that began in 1956 was quashed, rural weavers remaining in the country were forced to participate in socio-economic projects created by the Communist regime which took them away from weaving to work in other industries. Tibetan refugees in countries like India and Nepal depended on the United Nations for their livelihood and protection. In order to create an industry for themselves, Tibetans began to make rugs in contemporary styles for export to the U.S. and Europe under the guidance of Western producers. Unlike rugs from countries like Iran and Turkey, Tibetan rugs did not display an indigenous style, but rather styles were created to cater to the growing export market. Some of the early contemporary Tibetan rugs were not particularly appealing, lacking good design schemes and attractive colors. As Tibetan rug weaving began to increase in the 1970's, production centered in India and Nepal. Due to the high demand for quality Tibetan rugs, rug-making has become one of the largest industries in Nepal. Over time, Tibetan refugee weavers were joined by native weavers to make rugs in the same style. During the 1980's and 1990's some weaving workshops were reestablished in Tibet, particularly in Lhasa, however, rugs made here are typically for the tourist market or for use in China as gifts to ranking officials within the government. Overall the quality of these rugs has been inconsistent. In Lhasa, there are government sponsored workshops making rugs from imported wool and synthetic dye. While the weaving is competant, the material quality is only fair. There are also independent workshops run by Tibetans who have returned to their country or by foreigners, and these producers are trying to utilize high quality local wool along with good natural or synthetic dyes to produce a high quality product. However, rugs made in both types of workshops struggle to compete with the higher quality Tibetan-style rugs made in India and Nepal. A modest number of rugs from the independent Tibetan workshops have managed to be exported to the U.S. and Europe. During the mid-1990's, Chinese exporters flooded the market with Tibetan-style rugs in an effort to put Tibetan rug makers out of business, however, the quality of these rugs was inferior, and the Tibetan rug makers prevailed. Some Tibetan rug types are referred to as 60 Line and 80 Line, meaning that they are composed of 60,000 and 80,000 knots per square meter, respectively. Modern Tibetan rugs are known for their silk accents and fine, low pile.